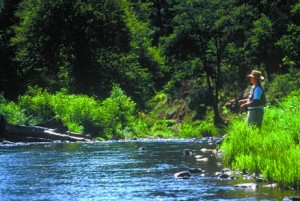 Just over three hours from the deserts of Phoenix and Tucson, the Arizona White Mountains are home to cool summer climes and fishing nirvana. This is a true fisherman’s paradise.  There are over 50 lakes and streams in the area that have produced current state-record fish for six different species.

Trout are the most prevalent species, with rainbow, brown, cutthroat and brook trout the most abundant. The state-record 23 lb. brown trout was caught at Reservation Lake.  The Apache Trout is a unique species found native only in headwater streams high in the Arizona White Mountains and are stocked in several area lakes.

Other species available include large and smallmouth bass as well as catfish and sunfish.  Walleye are available in Show Low Lake and Fool Hollow Lake.  In fact, the state-record 16 lb. walleye was caught at Show Low Lake.

Even when the fish aren’t biting, anglers in the White Mountains still enjoy a spectacular backdrop of pine and fir forests, dotted with aspen trees.  Before venturing out, make sure you have a valid Arizona fishing license.  Licenses can be purchased online at www.azgfd.gov or from an approved dealer.  If you plan to cast a line on a lake or stream on the White Mountain Apache reservation, a tribal permit is required and can be purchased at sport shops, convenience stores and gas stations throughout the area.